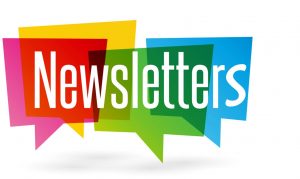 Firstly, massive apologies to all those who played against Folkestone Park last week, which was reported below as a loss for Hythe. Hythe did in fact win this match 86:67.  Well done all those that took part.
Secondly, there are a few dates you need to be aware of.  On Wednesday, 15 September, from 9.00am to 12.00 midday, the WI have hired the Clubhouse to hold a meeting, and a further WI meeting will take place on Thursday, 16 September, from 7.00pm to 10.00pm.  On Saturday, 18 September, the clubhouse has been booked for a private function from 6.00pm to 11.00pm.  On Thursday, 23 September, the hedging around the Club will be trimmed back so parking will only be allowed on the fence side of the car park.
Results
Hythe Shepway League men’s team won by 8 points to 2 against Ashford Town, and are 3rd in the League.
We played against Whitstable, Deal and Folkestone Park this week, losing to all of them, but pulled ourselves up by our bootstraps today to beat Wear Bay 88:45.
Pat Briscoe won the Sandwich Bowls Club Open Tournament this week.
The final Muddles scores are in and the winner is Peter Hobbis.  Well done Peter.  Here are the top 20. 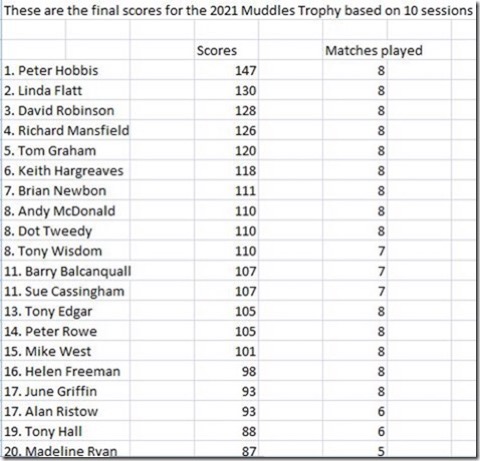 Ladies competition
Madeleine Ryan is organising an afternoon of bowling for all lady members on Tuesday, 21 September at 2.00pm, to be followed by afternoon tea with scones, jam and cream.  The sheet is now up on the wall, please get your names down ladies.
Closing drive
The sheet is also up for the closing drive on Saturday, 25 September. Please get your names down folks.

Club officers
We are now looking forward to the future and the AGM.  There is a list on the wall for prospective officers.  Please put your name forward if you are able to support your club by joining the Committee.
Results
Hythe beat Cliffe 91/65 and Penenden Heath 105/53, and our men’s Shepway League team beat New Romney 8/2 (80/50).
Club competitions
It is Finals Weekend in less than two weeks, 11 and 12 September, and all club competitions up to Finals level MUST be played by Wednesday, 8 September, so that the Finals Weekend can be sorted out.
The Club Competition lists have been updated on the website and the sheets will be put up in the corridor tomorrow.
It would be great if as many Members as possible were there to support Finals Weekend, and there will be a finger buffet on the Sunday.
Muddles
There is no Muddles on Monday, 6 September.  As there is a match on Tuesday, 7 September, the only Muddles next week will be on Friday, 10 September.
On Monday, 16 August, our Shepway League men’s team beat Cheriton 6/4.  Well done guys.
On Wednesday, 18 August, Hythe beat Folkestone 121/102 to win the Pepper Cup.  Well done guys.
At yesterday’s Shepway Bowling Tournament held at Folkestone Park, Folkestone Park ladies won the Rose Bowl, Lyminge men won the Wood Cup, and Hythe men’s and ladies teams, together, won the Stewart Allan Trophy.  Well done everyone that took part.  This was a great win for Hythe, and the first time we have won this trophy.  Here are the winning teams, with Kirsty Potter accepting the trophy from her Mum. 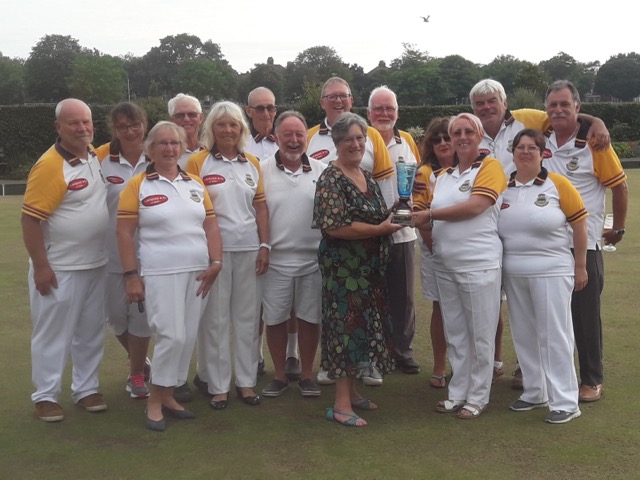 We have been asked to order some more Club shirts in Ladies style and also we are short of the larger Mens sizes.

Many Members have asked if the material could be in a much lighter material which is much cooler than our existing ones.
If you would like a Club shirt in this lighter material would you please let Mary Sherwood know by email: mary-sherwood@outlook.com. Please state size required.  Mary has a sample of the material.
Sizes available are –
Ladies

HOUSEKEEPING
The Men’s Captain would just like to remind everyone that, if you put your name on the sheet to play in a match, the onus is on you to check whether or not you have been picked to play and to ensure that you turn up on time on the day of the match.
The club would also like to remind everyone that if you play a game, be it a match or just a roll up, all equipment must be put away when you have finished and not left for someone else to do it.  Also, the last person to leave the club is responsible fir ensuring that the gate is shut and locked up.
FRIENDLIES:
We played Lyminge on Tuesday and won and won to Folkestone Park on Thursday.
MUDDLES
Please note that there is a home match at 2.30 p.m. on Thursday and Friday (20th) this week so no Muddles on Thursday nor Friday this week.
There will be no Muddles on either Thursday, 2 September, or Friday, 3 September, as there are home matches at 2.30 p.m. on both days.
This also applies to Monday, 6 September, and Tuesday, 7 September, when there are also home matches at 2.30 p.m.
Muddles will be on Friday, 10 September, as usual, but, as there is a home match at 2.30 p.m. on Friday, 17 September, Muddles will be on Thursday, 16 September.
All alterations are dependent on fixtures remaining as scheduled.
FORTHCOMING MATCHES

Entrance Cards;  We are aware that some members Entrance Cards have not been working recently.  If your card doesn’t open the door to the Clubhouse please place it in an envelope with your name on it and put it in the ‘Coach’ pigeon hole.  It will then be replaced with a new one..

Bar Volunteers: The Club is in need of more volunteers to work behind the bar when necessary.  The more members that are trained for this, the less onerous the task becomes for everyone. Please let Trevor or Len know if you are able to take this on.  .

Friendlies:  We played Canterbury away last Saturday and won on all 5 rinks.  The overall winning score was 54/96 to Hythe. On Tuesday we played Helio Mirror at home and once again we won 130/88.  Well done everyone who took part.

Ladies:  Unfortunately, the ladies lost overall to Lenham in the third round of the Mollie Cleggett.  Well done on making it to the third round ladies.  The ladies Shepway League team won all 4 points against Sellinge at home on Wednesday, so are still top of the League.  Well done ladies.  In the away game at River on Thursday the ladies won on one rink and lost on one.

On Monday, 1 August, the men have a Shepway League game away at Wear Bay, and on Friday, 6 August, they are away to Ashford Rail.

Friendlies
Hythe played Aylesham at home on 14 July and won 86/83.  Well done everyone who took part.
We played Penninsula at home on 16 July and lost 97/66.  Commiserations everyone.
We played Danson Park at home on 21 July and won.  Well done everyone who took part.
Ladies matches
The ladies have done really well in winning another round of the Molly Cleggett, beating Kearsney by just 2 shots overall.  Well done ladies and good luck against Lenham in the next round on Tuesday.
Our Shepway League ladies team also had another win with another 4 points, keeping them in 2nd place in the League.  Well done ladies.
Unfortunately, despite having around 50 lady members, we are still having trouble getting players for ladies matches.  We struggled to get 9 players for each of the Canterbury games, and we are now short of players for Folkestone Park on 4 August. This is an away game, but transport can be arranged.  If we don’t get support for these games we may not get the fixtures next year, which doesn’t bode well for the future of the club.  Please ladies, support your club by putting your name down for selection.
Men’s matches
Unfortunately Hythe lost to Canterbury in the Cox Cup.  Commiserations gents.
Muddles
32 determined players defied the heat to play Muddles on Monday, 19 July.  This was the 3rd session counting towards the Muddles Trophy and the top scorers were Tony Wisdom, Sue Cassingham and Geoff Prior with 18 shots.
Coaching courses
The club is looking to organise some coaching courses.  If you’re interested in attending please let Graeme Poole know and he will organise dates to suit.
Housekeeping
As you are aware, we have recently installed sensors in the toilets to automatically turn the lights on and off. This was carried out as they were constantly being left on overnight.

This still leaves a number of lights that have to be switched manually.

So if you lock up the Clubhouse at anytime, please carry out a walk through to ensure all manually switched lights are off. This is particularly important in the evening when more lights are likely to be switched on.

Results
Hythe ladies won their match against Canterbury in the first round of the Molly Cleggett and will now play Kearsney next Tuesday. There is also a Shepway League game against Canterbury, at home, on Tuesday and, because of the Molly Cleggett, another 4 players are needed for the Canterbury game.
Our Shepway League ladies team won their match against Cheriton 32/16 on Wednesday.  The ladies are now 2nd in the League.  Well done ladies.
Housekeeping
Just a quick reminder that everyone should keep the club informed of any changes to their contact details.
A number of members have asked about having their names on their club shirts.  Vic Powell can get this done for you at the end of the season if you let him have your shirt and the name.  Price to be confirmed, but will depend on how many we order.
Results
Hythe Shepway League men’s team played Lyminge away on Tuesday, and beat them 8/2.  Well done guys.
Fixtures
The two friendlies due to be played this weekend, home against River on Saturday and away against Marden on Sunday, have again had to be cancelled because we couldn’t raise a team.
A few bits and pieces for your attention:
Housekeeping

Please hang wet mats singly, one to each pusher.  These are new mats and are already beginning to perish because they are stored wet on top of each other.

Volunteers required
As you will have seen from the fixtures list we have a busy season ahead and are now asking for volunteers to help with the teas for the matches with visiting clubs. This does not entail any food preparation as the sandwiches are bought in.
Please contact Vic Powell, patandvic2003@gmail.com or  01303 230669, with details of the days and times you would be available. A rota system will be drawn up to ensure all matches are covered.
Results
Cameron Potter won his section quarter final of the County Singles beating Colin Strouts 21-19 and, with his brother Alistair, won on their rink for KentU25 17-25 against Lenham.
The results from the Shepway League match on Monday were Hythe 8 points Cheriton 2 points.  Hythe is now 3rd in the Men’s league.